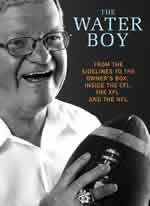 Bob Ackles devoted more than 50 years to football in British Columbia. From his earliest days as the BC Lions waterboy in their inaugural season in 1954, Bob’s star rose quickly, and by 1966 he was named the club’s director of football development. He was promoted again in 1971 to assistant general manager. Four years later, he was promoted to general manager, holding that title until 1986.

Under Bob’s leadership, the Lions captured the 1985 Grey Cup—their first CFL title in 21 seasons. This was to be a triumphant but temporary end to Bob’s Lions career, as he joined the NFL’s Dallas Cowboys after 34 years with the Leos. Bob spent six seasons in Dallas: three as vice president of pro personnel, and three as vice president of player personnel. He also played a key role in guiding the Cowboys back to the playoffs in 1991. Bob left Dallas following that season, but the team he helped assemble went on to win Super Bowls in 1993, 1994 and 1996.

Bob joined the Phoenix Cardinals in 1992 as director of college scouting before receiving a promotion to assistant general manager in 1994. In 1995, he was named the Philadelphia Eagles’ director of football administration. A year later, Bob reunited with former Dallas Cowboys head coach Jimmy Johnson in Miami as the club’s director of football operations, a position he held for five years.

In 2000, Bob was named vice president and general manager of the Las Vegas Outlaws, putting him in the history books as the only man to hold senior executive positions in the CFL, NFL and XFL.

In 2002, Bob’s triumphant return to the Lions was capped off with his induction into the Canadian Football Hall of Fame as a Builder. In an effort to return the club to its proper place in the community and the CFL, he recruited one of the league’s most successful coaches of all time, Wally Buono, and named him head coach and general manager in 2003.

In 2004, Ackles was inducted into the BC Sports Hall of Fame. Accolades for Ackles work continued in 2005 when Bob was honoured with the Jack Diamond Award by the Jewish Community Centre as Sportsman of the Year. Bob is also a Schenley Award of Excellence winner. In 2006, the Lions captured their fifth Grey Cup championship—their first since Bob’s return to Vancouver.

In September 2007, Bob’s highly anticipated memoir The Water Boy, a candid, personal account of his life and his more than 50 years in professional football, was launched and received rave reviews across North America.

Bob and his wife Kay had two sons. Steve and wife Sherri have three children, Robert, Ashley and Kyle. Scott, who is currently president of the Calgary Stampeders, and wife Theresa have two children, Kasey and Robyn.

On July 6, 2008 Bob Ackles passed away, but his work continues. At the time of his death, one of Bob’s goals was to create a BC Football Hall of Fame. Kay and Scott serve on the Hall’s Board of Directors, and the Board is devoted to carrying out Bob’s vision.