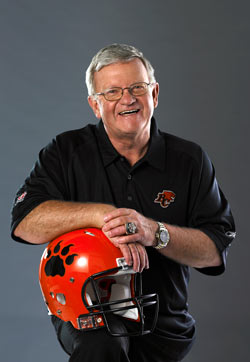 Bob Ackles had a dream...

His dream was to develop a BC Football Hall of Fame for all the football fans across British Columbia. Football was Bob's passion; he began as a waterboy and eventually worked his way through the CFL, NFL and the short lived XFL.

With all of Bob's success he never lost touch with the grass roots of football and the importance it plays in our local communities. This was one of the many reasons he wanted to leave a legacy that would honour our football heroes of yesterday, today and tomorrow.

On July 6th, 2008, Bob Ackles passed away before he could see his project launch. Help us honour Bob by supporting his dream!

"The vision of the British Columbia Football Hall of Fame is to recognize individuals who positively influence the sport of football in British Columbia, and to honour football heroes past and present."